Seeing and appraising backcountry furniture is one of our professional pleasures.  As collecting trends change from traditional to modern, it’s still fun when we locate a chest or chair that was made in our own backyard.  This walnut rocker with replaced seat, for example, was made by chairmaker Joseph Longenecker (1834-1909) in Uniontown, Maryland between 1865 and 1880. 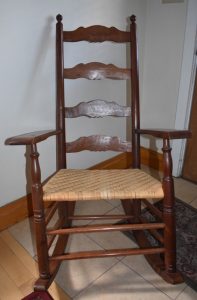 Joseph Longenecker was one of many artisans who worked in Uniontown during the 19th century.  Born in Adams County, Pennsylvania and trained as a blacksmith, Longenecker relocated to Uniontown, Maryland at the beginning of the Civil War.  He soon opened a workshop about a half mile outside of town on the Clear Ridge Road where he began making sturdy chairs for his friends and neighbors.

While relatively unknown outside of Uniontown, Joseph Longenecker’s chairs represent a unique regional style.  Made exclusively of local walnut and hickory, these chairs consisted of four-to-five serpentine or “angel-wing” shaped slats mortised and pegged, and occasionally nailed, into straight-turned stiles.  Longenecker chairs also have distinctive turned ball or acorn finials with small protuberances similar to chairs made in the York, Pennsylvania area and parts of the Delaware Valley.

Longenecker chairs were made with and without arms in both stationary and rocker form. Armchairs have plank arms supported by turned vasiform supports and plain front legs decorated with two bulbous ring turnings.  The greatest number of Longenecker chairs are rockers.  Like his armchairs, Longenecker’s rockers have slightly raked backs with legs that terminate in half-ball turnings inserted into plain rockers.  Chairs and rockers have double sets of hickory stretchers all around.  While mostly plain, front stretchers sometimes have three ring turnings.

All of Longenecker’s chairs have woven splint-oak seats stuffed with grass or horsehair.  There are also examples of his smaller sewing or “nurse” rockers that were made with matching splint oak backs and seats in a herringbone pattern.

Sometime after 1880, Joseph Longenecker moved to Cordova Township in Talbot County, Maryland and died there on June 26, 1909.  He is buried in the Fairview Church of the Brethren Cemetery.

In the next post, we’ll look at the chairs of another 19th century Carroll County artisan, John Slagenhaupt of Taneytown.

Please send us an email and we'll get back to you, asap.